One of the first things I did upon leaving my full-time job was re-do our budget. When I got a part-time job, I re-did the budget again. “The budget” is something that receives my constant attention, if you catch my drift.

“The budget” is another post for another time, but one of the areas where I knew J and I had to control our spending was food. Ah food, why must thy be so expensive? Namely, why is it so expensive if you don’t want to subsist on a diet of ramen noodes and rice? Food is expensive, so I’ve been thinking through our grocery list ten times over before we even get to the store on Sundays. What can we buy at Aldi at a fraction of the price? What is on sale? Should we go with the ten gallon bucket of rice to save money? Which kind of meat do we want to treat ourselves to this week?

Now, we’re not absolutely starved for cash, and so we’re not eating like monks. We love to cook, and that requires whole foods, fresh fruits and veggies, and meat. Also, spices and cheeses and milks and breads. In order not to go bankrupt, though, we typically buy store brands, try to make things last, and abstain from splurges whenever we can.

But what if we could buy anything we wanted? Last week, I saw this post over at Food Riot – My Grocery List If I Had All the Money – so I decided to dream up my own fantasy grocery list. My dream team, so to speak. Ah, if only…

It’s not a secret that J and I are big cheeseheads. One of our favorite (and probably most expensive) dinners is our “cheese and wine nights,” when we splurge on sample-sized hunks of various cheeses from our local fancy-schmancy grocery store, pair it with some three-buck chuck from Trader Joe’s and pop in a movie. If we were zillionaires, we would probably eat like this every damn week. Because also, you know, we will also eat the cheese blocks for lunch the next day, or a snack, or a dessert…just because of CHEESE.

I’m a new convert to the cult of coffee in the morning; before, I could only drink the ultra-sugary confections from Starbucks or Caribou, and disliked the taste of “real” coffee with only a bit of milk and sugar. Now, I’ve been converted and enjoy a small(ish) cup with chocolate milk and some sugar-free caramel syrup every morning. J, on the other hand, sucks down about three to four cups of the black stuff every morning. Right now, we’re content with Foldgers, but if we were cool rich people, I would mix it up with some fancier, more flavorful roasts. I might also buy that Starbucks Mocha brew, which is like $10 or something stupid. Also, I would buy an espresso machine and just make my own damn mocha EVERY MORNING.

Really, any alcohol, but probably more craft beers for J and more boxes of Chardonnay for me. So I don’t have expensive tastes, but justifying any alcohol purchase when it’s not a special occasion is tough when scrilla is tight.

Can you tell that we’re craving variety in our drink routine? But still, I would buying up all the Orangina – the French orange soda/spritzer – from wherever they sell it around here (right now, the only place I’ve been able to find it in Metro Detroit is – go figure – the very fancy gas station down the street). I introduced J to the wonders of Orangina when we were in France in 2012, when I bought it from a convenience store at the train station on our way out of the country. He was hooked but by the time we got to Germany, we couldn’t find it anywhere. Wah wah. But oh, it’s SO GOOD.

Now, can someone tell me what’s up this Orangina ad?? Man, I miss France. 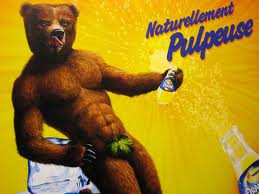 I’m talking all the Dove dark chocolates (for, uh, safe-keeping) as well as the real stuff for baking and melting and drizzling.

Because it’s expensive, because Ina always uses it, and because if I were rich, I could…

I don’t think that limiting one’s meat consumption per week is a bad idea – really, we don’t need to be eating animal flesh EVERY night of the week – but if I had my way, I would only be buying meat from local farmers. It’s the sustainable side of me, but I do believe that animals raised humanely on a diet that makes sense for them (grass instead of corn mush for cows) produces better meat. Heck, I don’t need to believe it, I know it’s true. I grew up a little spoiled; my grandfather raised beef cattle for a large portion of my childhood, so we always had half a cow in our downstairs freezer, and man that meat tasted good. If I had my way, we would find a way to source all our meat this way.

Berries and other stupidly expensive fruit

Why is the ability to eat these a sign of great wealth?

Why is it that fruit is so expensive? Some weeks the most expensive item on my grocery receipt is the five apples we picked up in the produce section. Maybe this is because it’s March and apples are NOT in season – and we’re shopping at Kroger – but it still pains me how expensive fruit can be at your regular grocery store. Berries especially. There is nothing I want more than a few cartons of blueberries or raspberries to snack on during the week. Maybe a carton for smoothie making. But when they’re $4 for half a pint, I just can’t do it.

Once I have a garden, I’m hoping that herbs will be easier to come by. But why does it cost $5 for a bunch of herbs at my grocery store? If I had all the money, I’d buy all the damn herbs I needed for my recipes instead of settling for the dried versions (never have I used fresh parsley in a recipe…).

Maybe this should have gone under cheese, but damn it, if I had money I would buy this every damn week. Back when money still made no sense to me – in college – I would always have a tub of sun dried tomato Alouette cheese on hand in the fridge. My friends, there is no better snack that this delicious cheese spread on some Cheez-Its. Nothing. I would eat it every damn day.

Give me all the Alouette cheese. ALL OF IT.